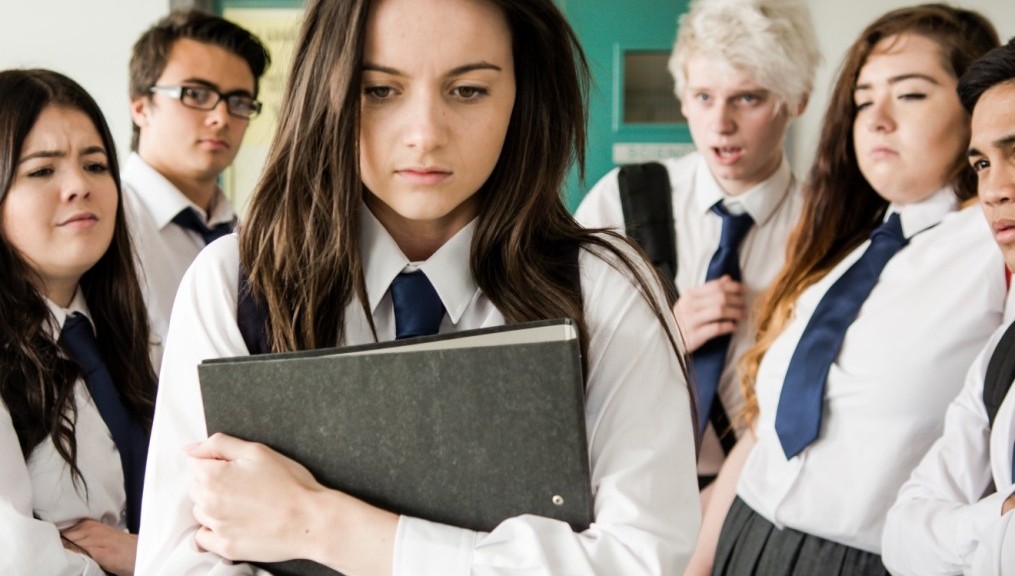 Firstly, what is a bully? To me a bully is someone who deliberately targets those they deem weaker than themselves to give a sense of empowerment. In my experience – from the play grounds to the work place – a bully is masking insecurities of their own and looking for a target to vent their frustrations.

It was always understood to be a childhood ailment like the chickenpox. ‘Every child goes through a bit of teasing’ it is said. Is that dismissal good enough? Is a child coming home after having suffered a day of physical and mental torment simply a rite of passage? It shouldn’t be. Children can be cruel to each other, especially teenagers. At a time of life

where they are at their most vulnerable and most insecure is when these bullies tend to surface (being vulnerable and insecure teens themselves). So who is to blame for this distinctly inhumane way of behaving? After all, no child is born bad. Television, magazines and mass media not only fuel these insecurities by displaying glossed over images of what they should aspire to be but they also make violent images and videos more accessible. This is likely to be a contributing factor but I don’t think it is wholly responsible. After all, bullying has been present in our society long before the age of social media.   The home life of the child can also be a huge influence on how they behave with their peers. If bullying is witnessed at home it will follow them into the rest of their lives. This isn’t always the case either. I have met many children from difficult backgrounds and they still approach life with the most pleasant natures. The issue of bullying isn’t something that one solitary person/scenario can be blamed for. It is a problem which we as a society need to take collective responsibility for. Some where along the line the younger generation have been given the impression that it is okay to treat those ‘weaker’ or ‘different’ with hostility.This isn’t a new phenomena. Bullying has been around since society was first established. An alpha instinct is deeply embedded within our psyche but as civilised people we should be moving past that.

Bullying doesn’t stop in child hood. It is becoming evident that more and more adults are experiencing bullying in the work place. Let’s be clear… This means that grown men and women are subjecting colleagues to taunts, slurs and sometimes even physical abuse. Someone once said to me, “I’d rather be the bully than the victim.” This was a man in his twenties.

I have always had a special resentment against bullies. It is likely to come across in this article. Having been the victim of taunting because I was a ‘different’ child and because I would rather read than spend time with my classmates. The advice I received at the time was to make myself more like the other children my age. That was not helping. I am thankful that it made me a stronger adult for others this doesn’t ring true.

The problem with bullying is that it becomes more acceptable by people dismissing it as ‘a way of life’ or in adulthood by making the victim feel like they have done wrong by not ‘taking it’.

To quote a much beloved character penned by writer and friend Leo St Paul, ‘Bullying is the worst kind of cowardice’  I wholeheartedly agree.