“What is it?” he asked eagerly. “Tell me!” Charlie urged.

“I am a witch.” said Aunt Trudy softly and slowly.

Charlie’s eyes lit with joy. He had always known there was something unusual about his lovable aunt. “Does that mean I’m a witch too?” he asked excitedly.

“Don’t be stupid boy,” said Trudy. Charlie’s hopes were dashed in an instant. When Trudy saw his sad little face she continued, “Being a witch takes years of practice. I will show you but in the meantime … What to do about those bullies…” her voice trailed off as she heaved a heavy, dusty, green leather bound book, slammed it on the table and proceeded to unbuckle the golden clip that held the book closed. Dust flew from the pages as they were turned. Aunt Trudy ran her finger slowly over the hand written words. The writing was so scribbled and hurried it was difficult to read.

“Aha!” announced Aunt Trudy in triumph disturbing their quiet contemplation. “This ought to do the trick!”

And an old woman’s nails,

Take a frog and a pot of snails.

Mush them together in one big stew,

Add a drop of blood but it must be new,

Along with rat tails, not one but two.

Give to your enemy; they must drink it fast,

Every single drop or the effects won’t last,

Now they won’t say a word until you ask.

“Lucky we have all the ingredients right here,” said Aunt Trudy cheerfully pulling bottles from the shelf. Charlie picked up a jar labelled ‘pickled raven’s claw’. He opened the lid and brought the jar to his nose. Aunt Trudy snatched it back from him. “Don’t sniff that, not unless you want a pig snout,” she warned.

“I’m not sure about this,” the nephew said hesitantly.

Aunt Trudy began pouring the ingredients into a black ceramic bowl. The contents were bubbling, mixing together to form an orange paste. “Don’t be silly, that bully will learn.” There was a crazed look in Aunt Trudy’s eyes that Charlie didn’t like one bit.

Charlie asked “Will they get hurt?”

“Not unless you want them to.” Aunt Trudy took the bowl, held it high above her head and whispered the magic words. “Munchlum Doodledum Frooglepop.”

She took some to their garden, Charlie followed. The neighbours’ dog, Benny, had managed to climb onto their grass again ruining Aunt Trudy’s vegetable patch and leaving canine deposits everywhere. Benny was yapping uncontrollably.

“What are you doing?” the little boy asked when he noticed his aunt staring at the dog.

Aunt Trudy held the bowl out in front of her. “First rule of witchcraft Charlie, take out the neighbour’s pesky pet.” Benny was wagging his tail eagerly and still yapping. Trudy lowered the bowl to him and he took several large gulps not stopping to sniff. He started yapping again. Charlie folded his arms across his chest in disappointment. “Give it a moment,” Trudy said. They both watched the dog. Suddenly Benny’s voice was lost. His horrid screeching bark became silent. His jaws were open and his lungs were pushing but no sound came out. “I do that when I want to shut that thing up,” said the aunt. “Now you know how it works, give it to your bully.”

Enjoy this? Click HERE to read the full story! 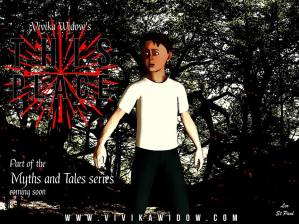