I was just a little kid when I first realised I had the power to bring things back from the dead. It’s not a skill that I would put on a job application or anything but it is definitely something not many people can do.

My beloved gerbil, Flower Pot, died and like most kids losing a pet I was distraught.

“We’ll put him in a nice box and bury him,” mum had said softly.

“Just put him in the bin.” My elder brother was not so sensitive.

I hadn’t been able to bring myself to move Flower Pot. When he started to stink we all agreed the time had come.

I lifted Flower Pot from his cage.

“He was a good gerbil,” I muttered ceremoniously. Then I felt his little foot twitch.

I was almost at the point of agreeing when Flower Pot twitched again. I almost dropped him when he flicked his little ears, opened his beady eyes and turned over.

Mum, dad and my brother all shared a shocked expression that could only have been heightened if it had been me who had come back from the dead.

I grinned. My pet was safe and sound. His furry little body was warm again. He gave a squeak. I gushed. Then he sank his teeth into my finger. I had to shake him off. It took dad and my brother’s strength combined to pull the blood thirsty rodent from me. Flower Pot fell to the ground. He ran across the room. In the commotion the chair was knocked over, landing on the gerbil. Flower Pot still ended up in a box in the yard that day.

When word got out that I could bring pets back to life I was inundated with requests. I tried to explain that Fluffy and Snowball wouldn’t be the same but people were so attached to their animals who was I to stop them?

When Mrs Albot at number twenty four asked me to bring back her boa constrictor George, I had to call it quits. There was already a monster rabbit terrorising the local kids and a vicious goldfish in the pond in the park. We really didn’t need a 7ft reptile with a taste for flesh slithering around.

I hung up my walking dead pet business and life carried on as normal. That was until I met Harry.

Walking home, clutching the straps of my backpack and whistling to myself I passed the church. There was a teenaged boy sat on the steps. He was weeping behind a mop of black hair. His arms were tucked inside the sleeves of his hooded jacket.

“Are you okay?” I asked. I loathed to see a stranger in trouble.

He looked up at me teary eyed. His eye liner had smudged.

He removed a photograph from his pocket. It was of a girl who would have been very pretty if it weren’t for the black curtains of hair almost concealing her entire face. Two blackened eyes peered out and black painted lips pouted.

“She was so young. There was so much ahead of her.”

I felt sorry for him. My aunt said my ability was a gift. I wasn’t so sure. She hadn’t seen Flower Pot almost rip my finger off. Then again, I hadn’t tried it on humans before. Maybe this time it would be different.

The boy led me to the open casket that Zoe lay in. She looked peaceful. Her face was as pale as it always had been. She wore her signature black. Judging by the photo the girl had been preparing for her funeral her entire life.

I touched her forehead. Harry gave a gasp that echoed through the church as her eyes opened. She sat up like a villain in a vampire movie. Zoe reached her hands out and Harry helped her out of her satin bed.

It was quite a romantic scene really until she lunged forward and tried to chow down on his neck.

“Yeah, she may get a little bitey,” I warned.

“Are you feeling okay?” he asked her.

Harry turned to me. “What is wrong with her?”

“Considering she was dead not a few moments ago I think she looks great,”

“She won’t make much of a conversationalist and you will have to stop her biting people, but all in all you have her back. She looks zombielicious!”

Subscribe to the page for more images, news and stories from Vivika Widow’s Myths and Tales series. 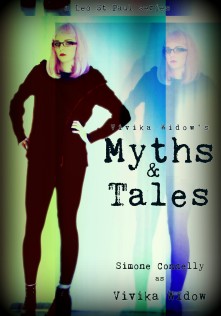 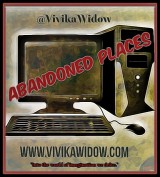